The HKFC Open continued this evening, with eight second round that featured yesterday’s Round One winners against the top eight seeds.

Six of the seeds won through – five of them in straight games – withsecond seed  Mazen Hesham ending home hopes as he saw off Alex Lau and top seed Marwan ElShorbagy easing past Bernat Jaume, 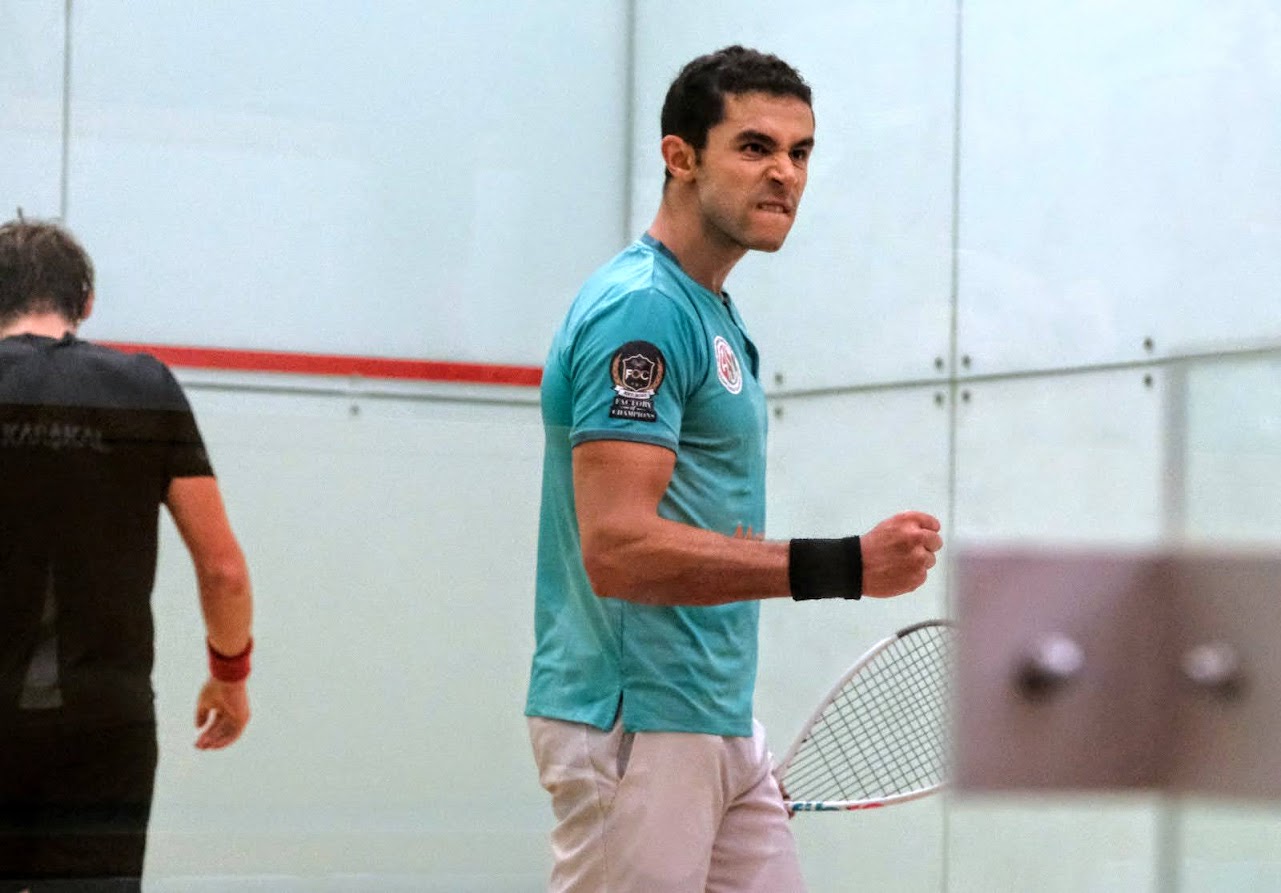 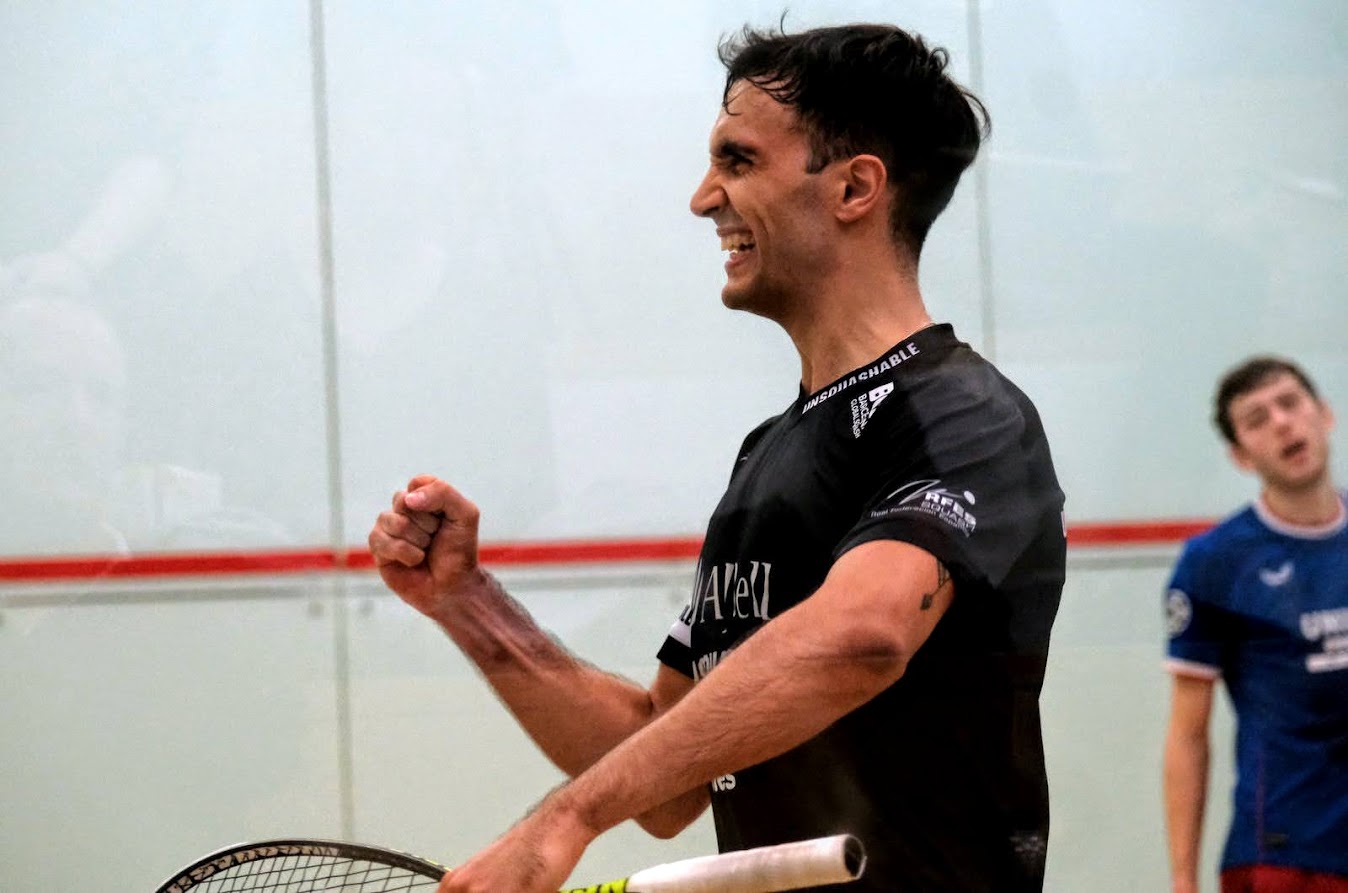 Last and longest match of the day saw Spain’s Iker Pajares grind out a win over Rosy Stewart.

Story of the day though was the return to action of former top ten player Mohamed Abouelghar after a year off with injury, the current world #846 coming from a game down to beat compatriot Aly Abou Eleinen.

Read on to see how it all unfolded … 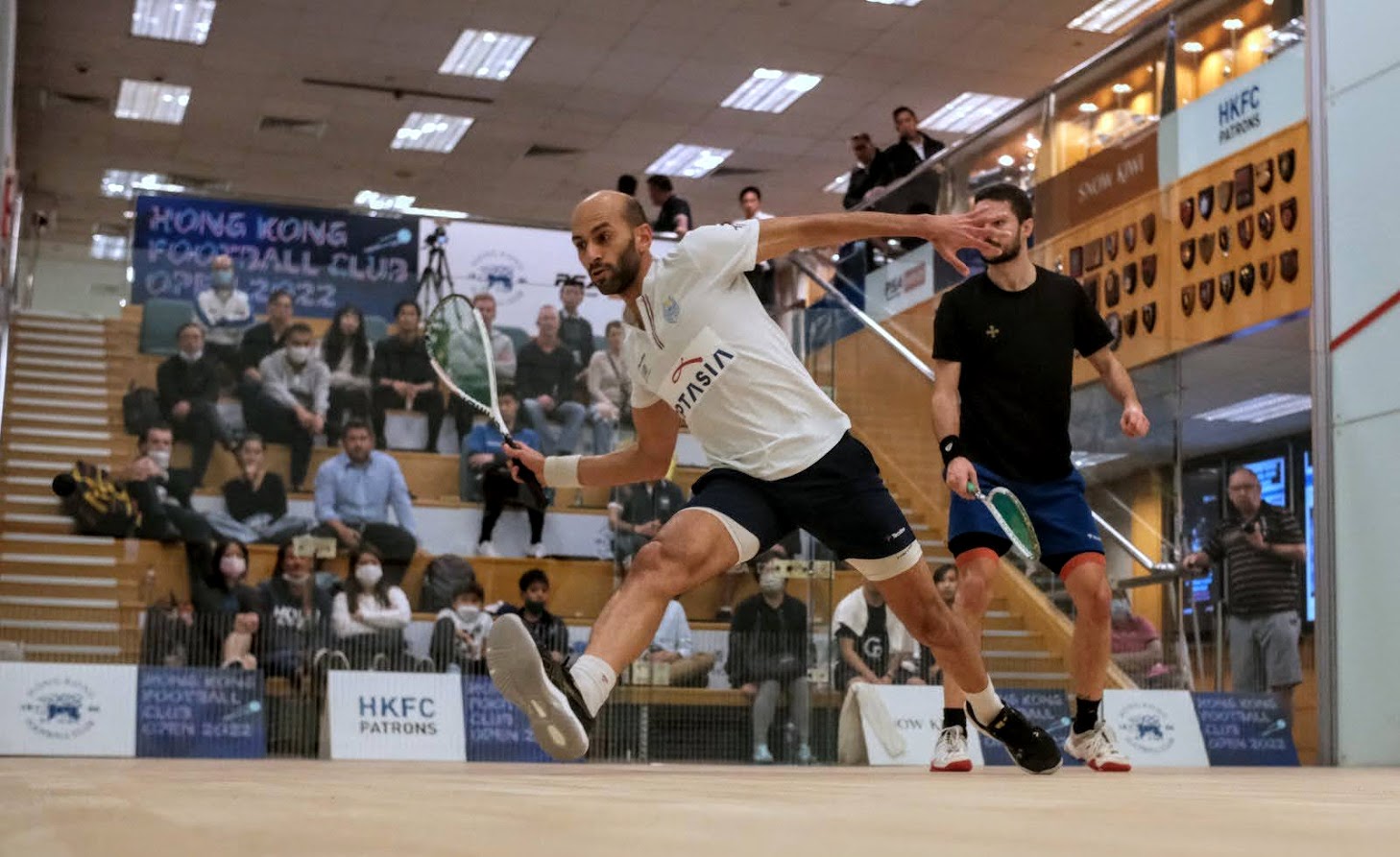 There’s still Spanish interest in the draw though, after seventh seed Iker Pajares ground out a four-game win over Scotland’s Rory Stewart to round off the evening. 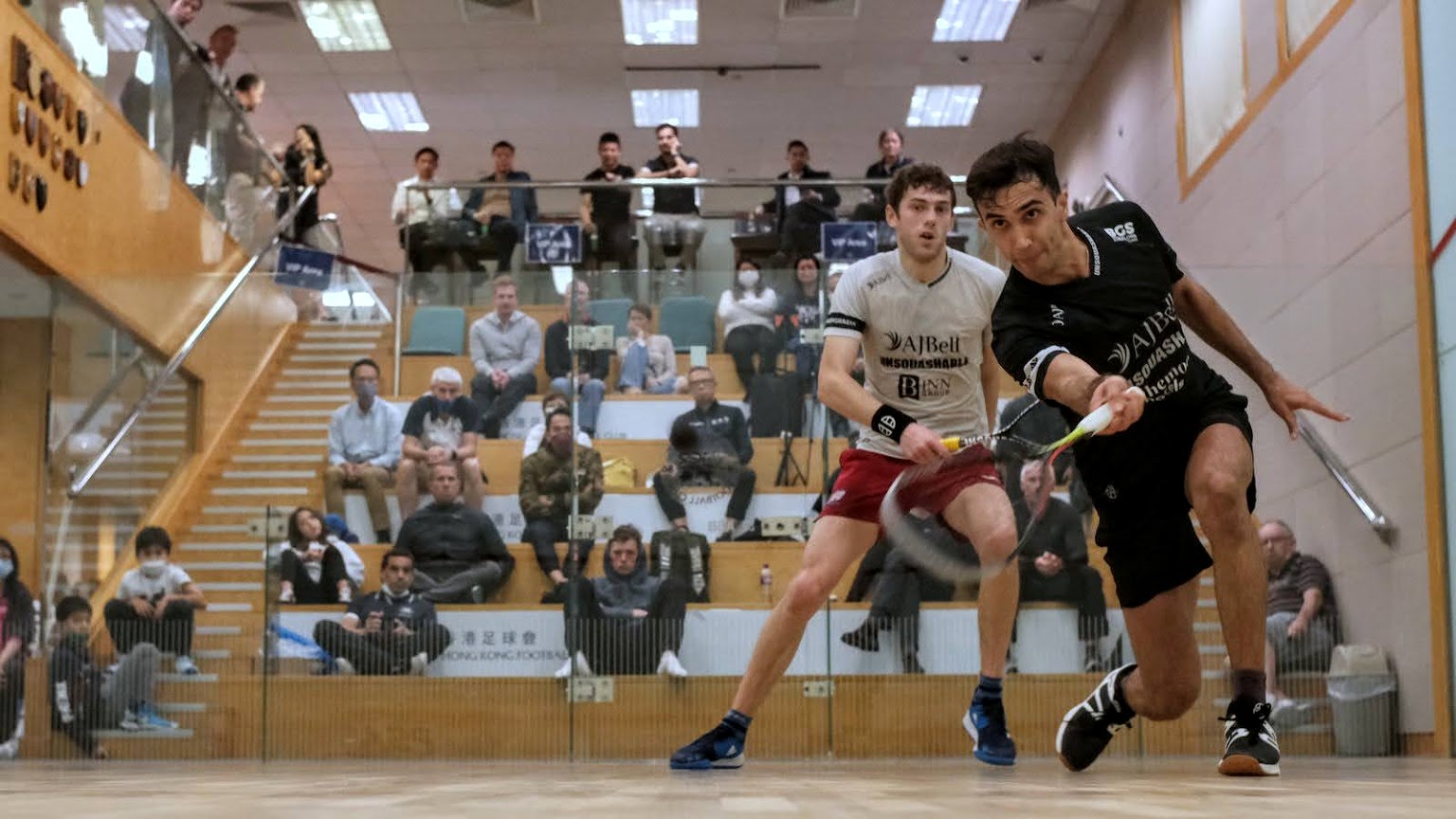 Tonight’s first pair of matches were both between compatriots, and both were upsets, of sorts. 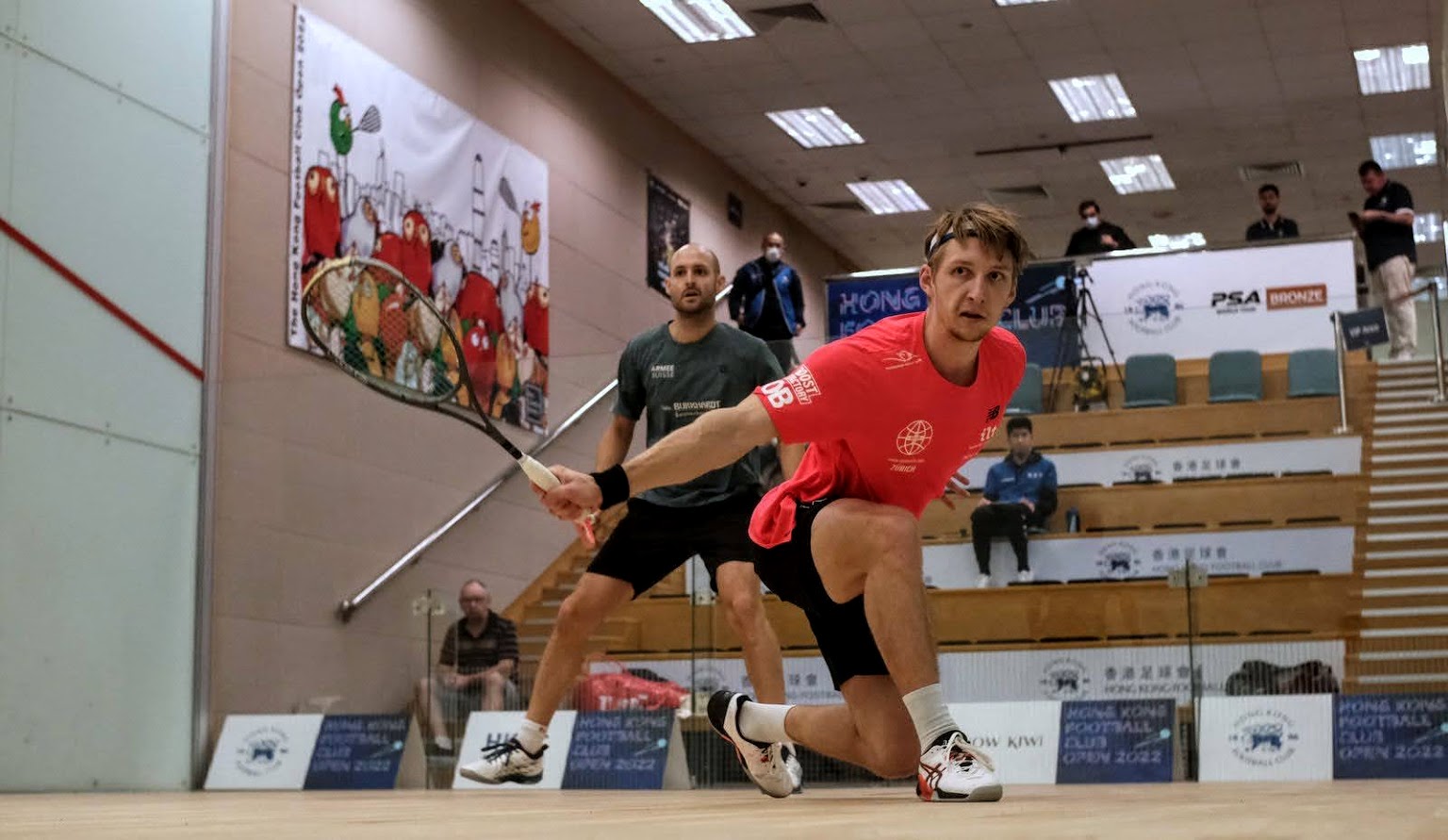 Dimitri Steinmann got the better of a close opening game against fourth seeded fellow Swiss Nicolas Mueller, then proceeded to dominate the next two games, winning in just under half an hour.

“Very pleased with that, I was playing well,” said Dimitri. “We played in the final of the Czech Open a month ago and he won 3-1, so it’s good to turn that round.

“We seem to play every December, and I win those, but in October and november he wins!” 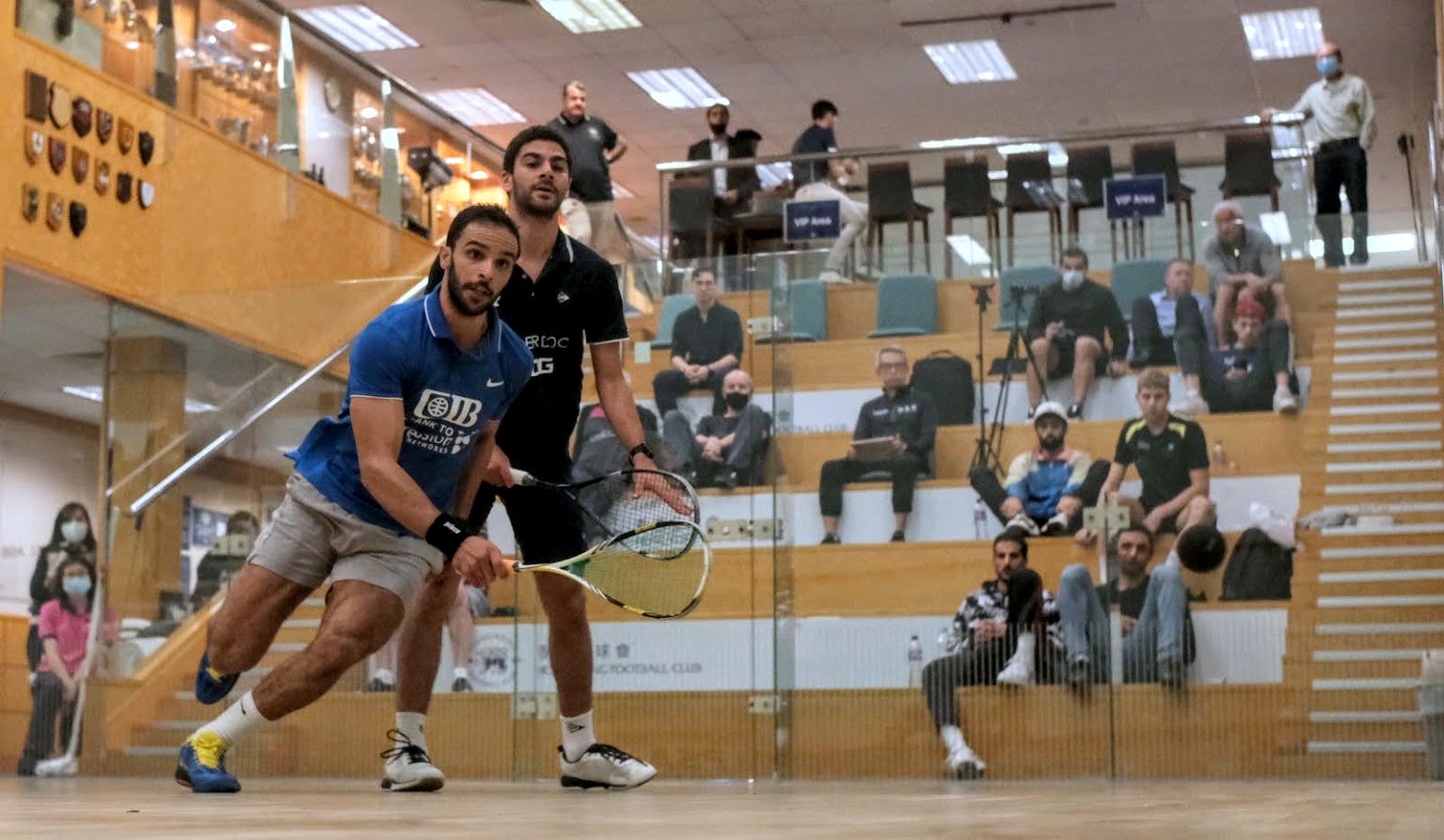 When the world #846 reaches the quarter-finals of a Bronze event you’d expect that to be a huge upset. But for Mohamed Abouelghar, fifth seed on pegged ranking, this was his first match for a year. He was up against up and coming fellow Egyptian Aly Abou Eleinen, who took the first game with something to spare.

But Abouelghar slowly worked his way back into the match, levelled then edged a tight third game, and controlled the play in the fourth as if he’d never been out of action. His relief at the end told a fifferent story, though. 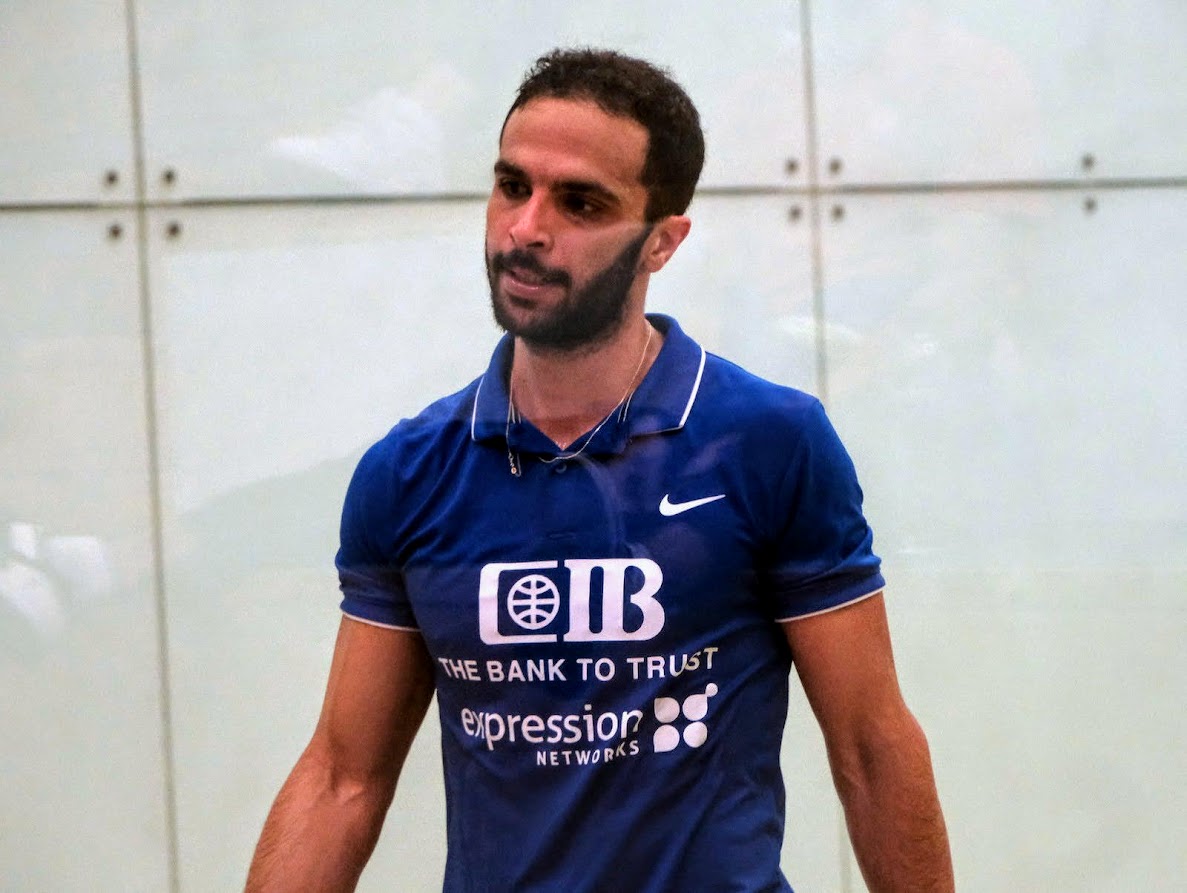 "I was really nervous before the start," said Mohamed, "it's been so long I didn't know if I knew how to play a match any more.

"It took me a game to get back into it, but I thought it's been so long I might as well die on court, I just gave it everything.

"It's the first time I played Aly, he's a good fair player and I'm sure we'll have many more battles. 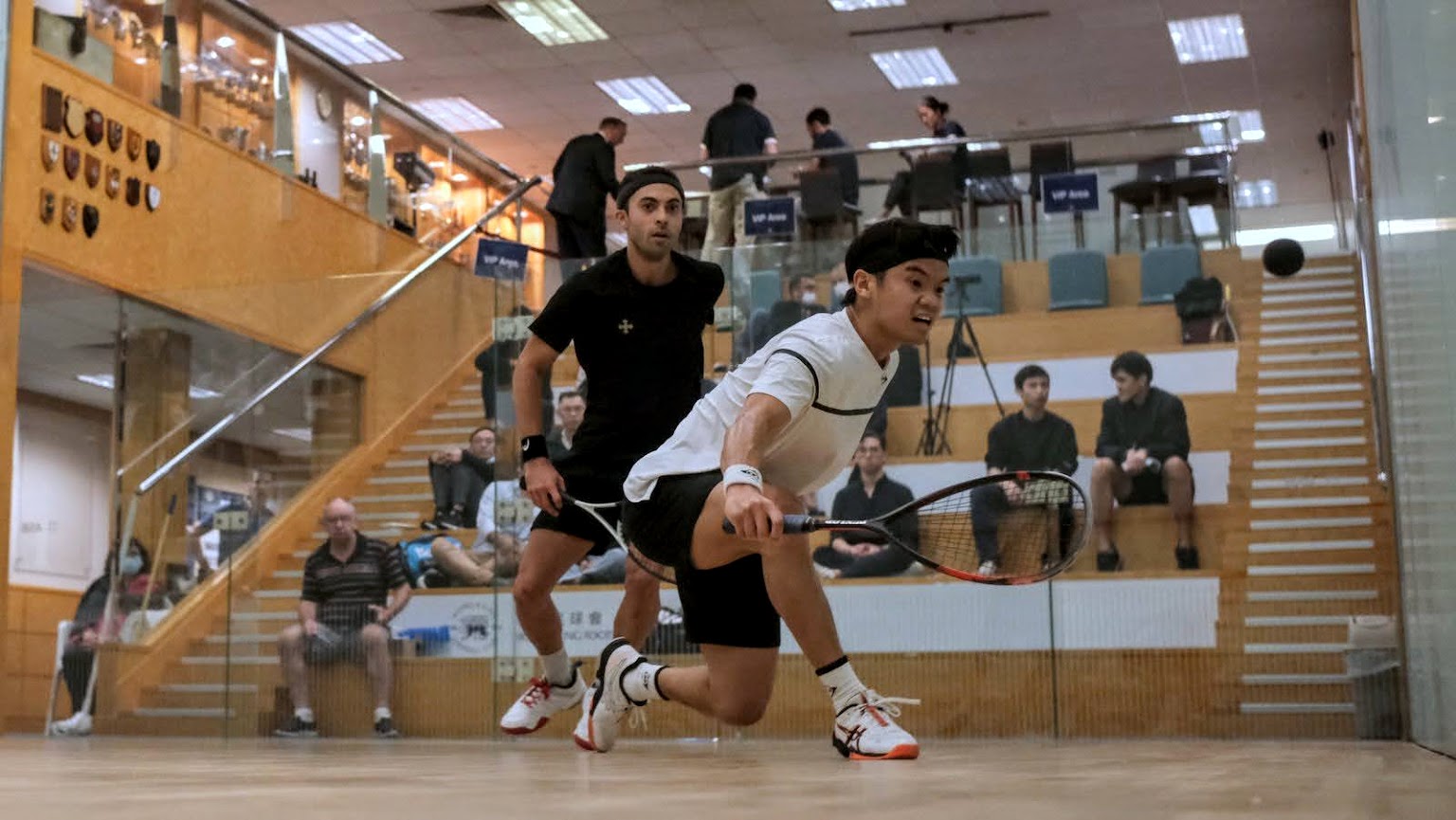 The second pair of matches produced straight-game wins for third and sixth seeds Youssef Soliman and Eain Yow Ng, both playing surprise winners from round one.

Soliman trailed Balasz Farkas for the early part of the opening game, he never looked back as he accelerated away to take the next two. For Ng it was the other way round as he eased into a two-game lead over Juan Camilo Vargas, then had to fight back from a deficit in the third to complete the win. 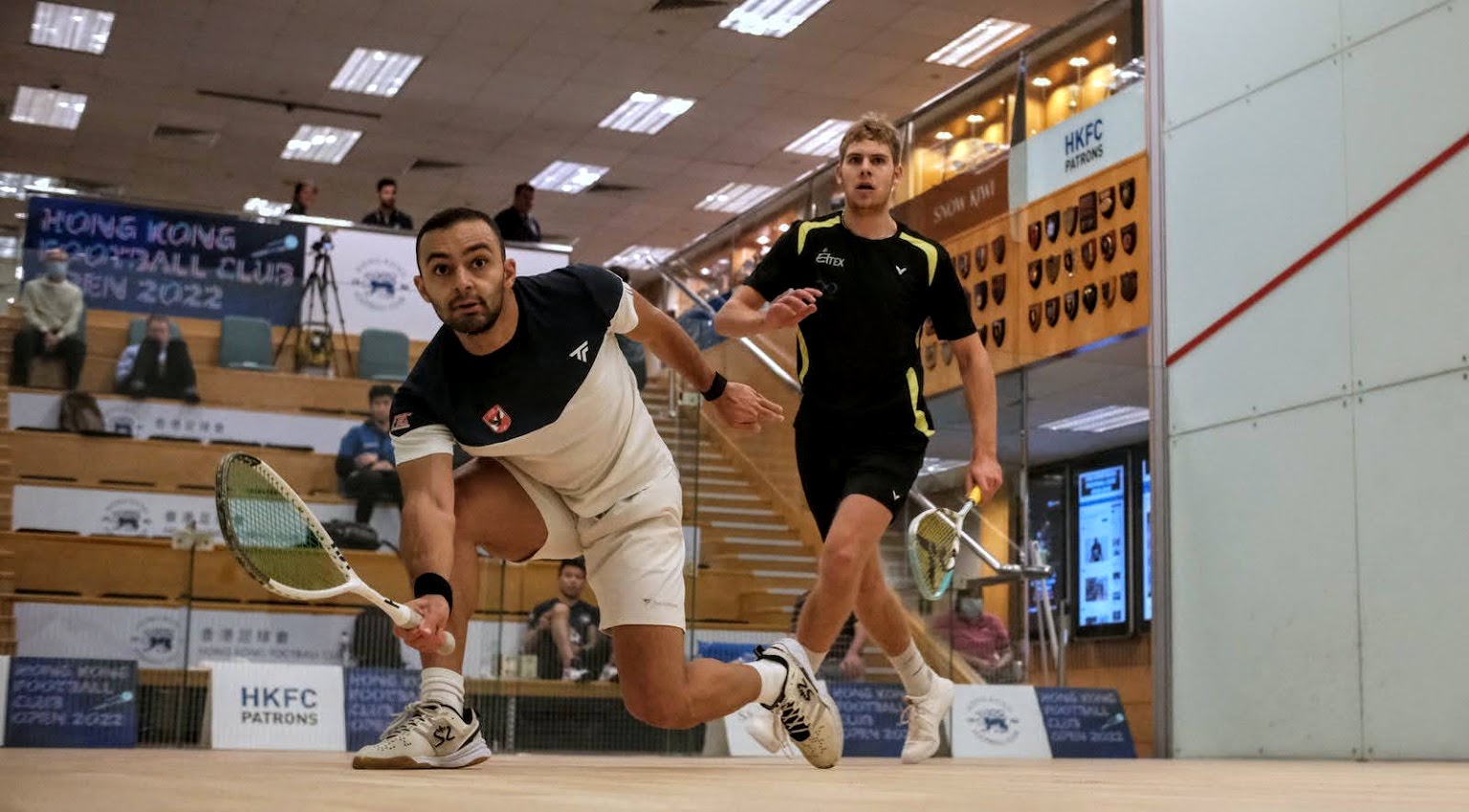 End of the run for Alex as ElSherbini dethrones Lobban

Local hero Alex Lau came up against the in-form Mazen Hesham with the home crowd expectant. They were disappointed in the first game, which Hesham completely controlled, but Alex started to make an impression in the second, had a game ball but couldn't quite convert.

The third was competitive too, but it was the Egyptian who found that bit extra at the end to close out the win. 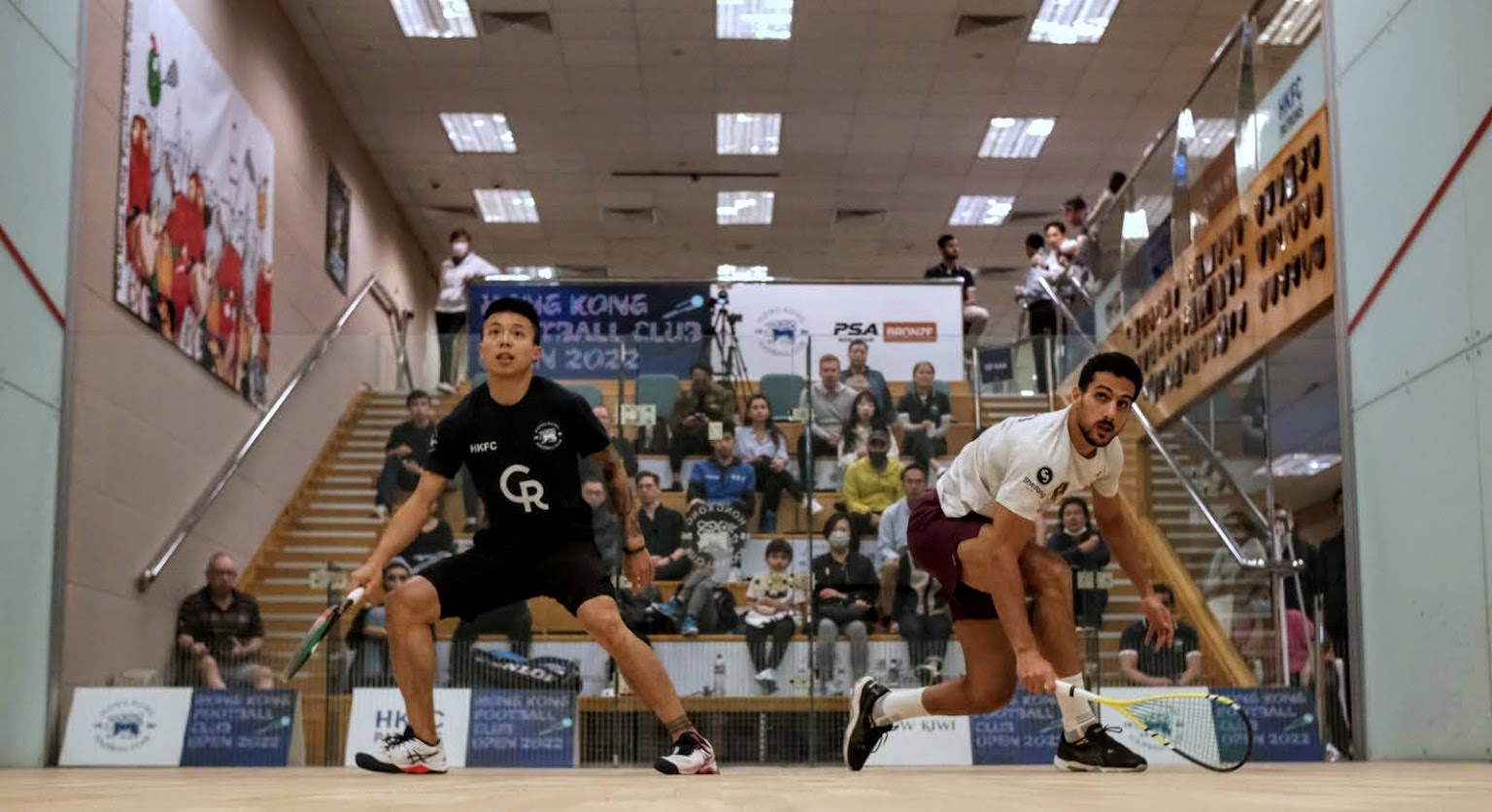 Greg Lobban won this title back in 2019. It was a $30k Challenger then, but now as a $50k Bronze event Greg is seeded eight. Nevertheless he was up against 9/16 seed Mohamed ElSherbini, and the Scot started well enough, taking the lead 11-7. ElSherbini bounced back to take the next two, and although Lobban forced a decider it was all ElSherbini in the fifth as he raced through to the quarters.