The HKFC Open continued this evening with four quarter-final matches on Court 7.

The top three seeds – all of them Egyptian – won through to the semi-finals, but an Egyptian clean sweep was prevented as Switzerland’s Dimitri Steinmann brought Mohamed Abouelghar’s comeback to an abrupt end.

Read on to see how it all unfolded … 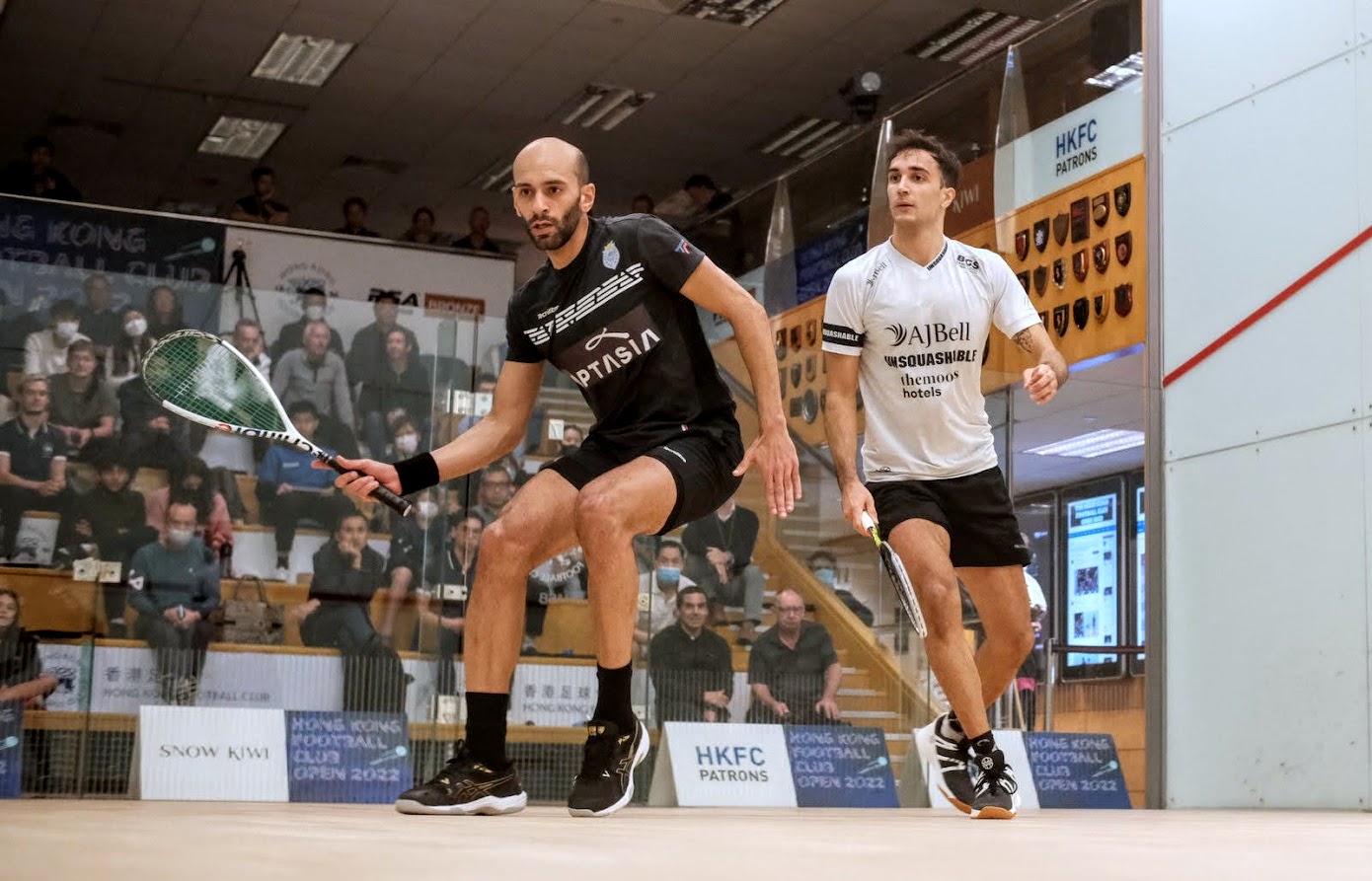 Marwan fights through in three

Top seed Marwan ElShorbagy had to fight back from 3-8 down in the first and third games to quell the challenge of Spain’s Iker Pajares in a match that a little tetchy in patches.

It’s a nice court, but a tough court to play on, it takes a good shot and you have to be on your gaurd or you can lose points quickly.

I tried to concentrate on my accuracy and not do too much running, but that’s tricky against Iker. I really had to focus after going behind in the first and third so I’m very happy to get through in three and hopefully I can play well tomorrow. 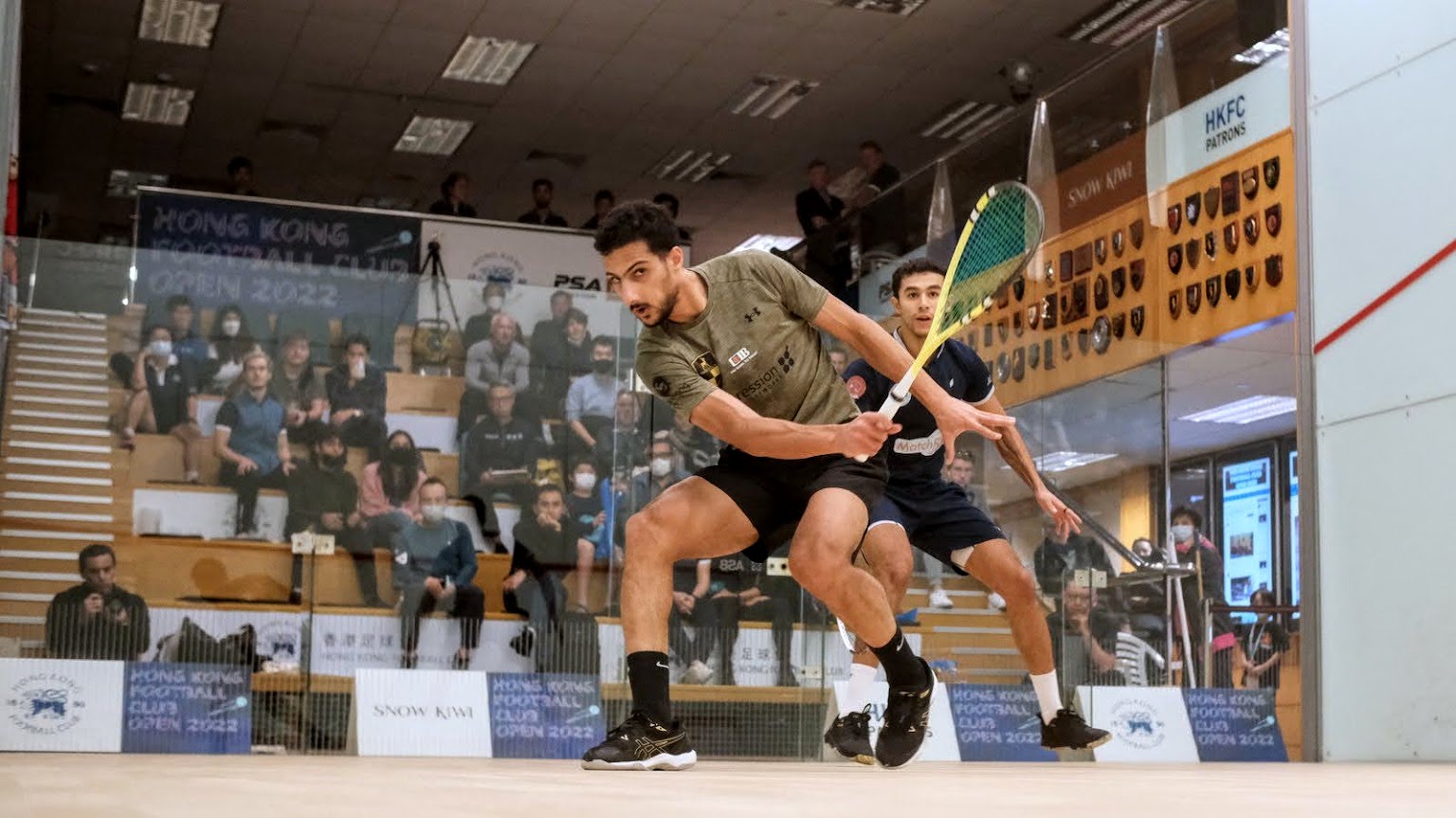 Second sees Mazen Hesham and Mohamed ElSherbini served the HKHC crowd a thoroughly entertaining and good-natured match, which featured some remarkable skills by both players and a number of fantastic rallies that we’ll have to extract from the replay!

Mohamed and I have always had good matches, from when we were juniors, so I knew it was going to be a tough match. I just needed to stay on my mettle throughout the whole match.

It’s the last tournament of the year, so we’re all feeling it a bit, but it’s good to have the Asian tournaments back on the calendar, they’re alweys enjoyable. 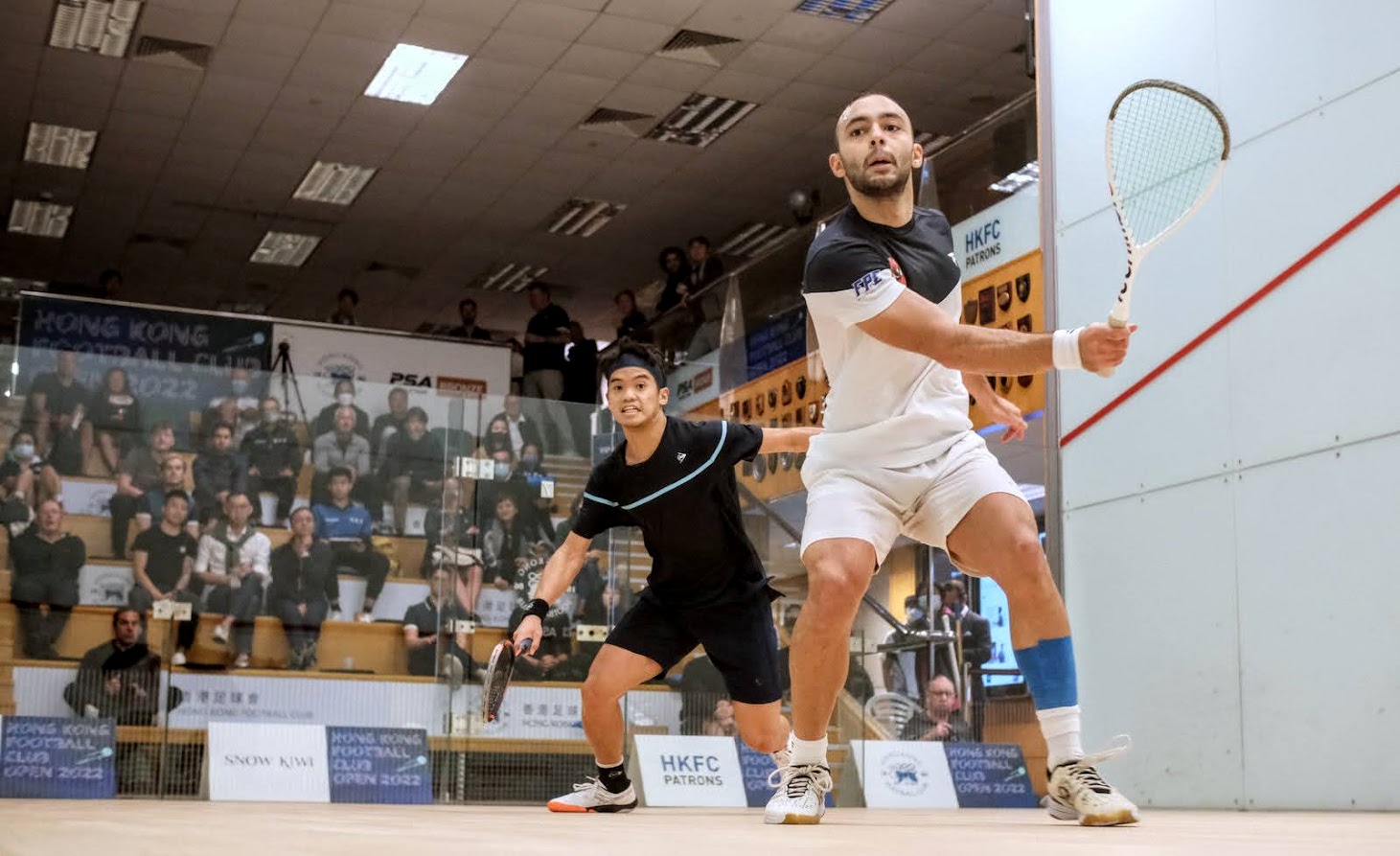 Soliman through to second HKFC semi

The scoreline might suggest a comfortable win for third seed Youssef Soliman, but it was far from that. Eain Yow Ng, perhaps slightly hampered by an ankle injury that needed 10 minutes’ treatment toward the end of the first game, never gave an inch and forced Soliman to find his best squash to stay ahead.

Frustrated by a few decisions that went against him towards the end, Ng was never far away and the scoreline scarcely does justice to the pace and closeness of the rallies. 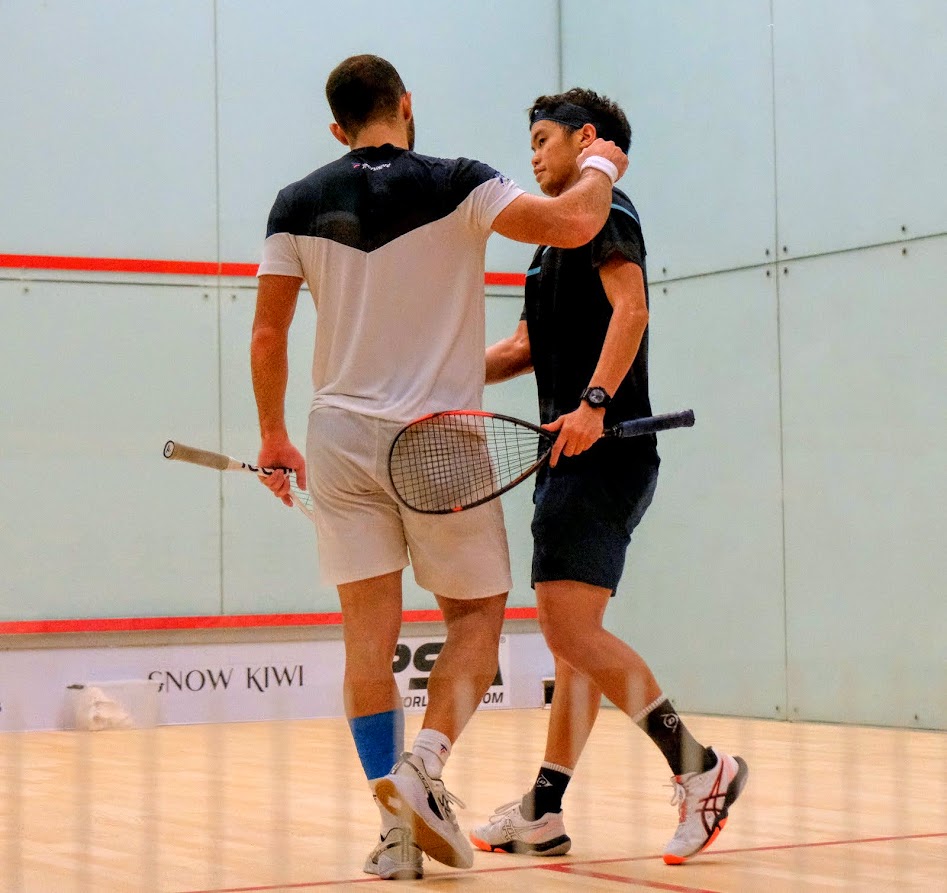 We're very close, we went through juniors together, he's just a year younger than me, I don't really like playing people like that, I'd rather play someone I didn't like!

This one was tough, he was getting back into it, especially in the third, so I'm really happy to close this one out." 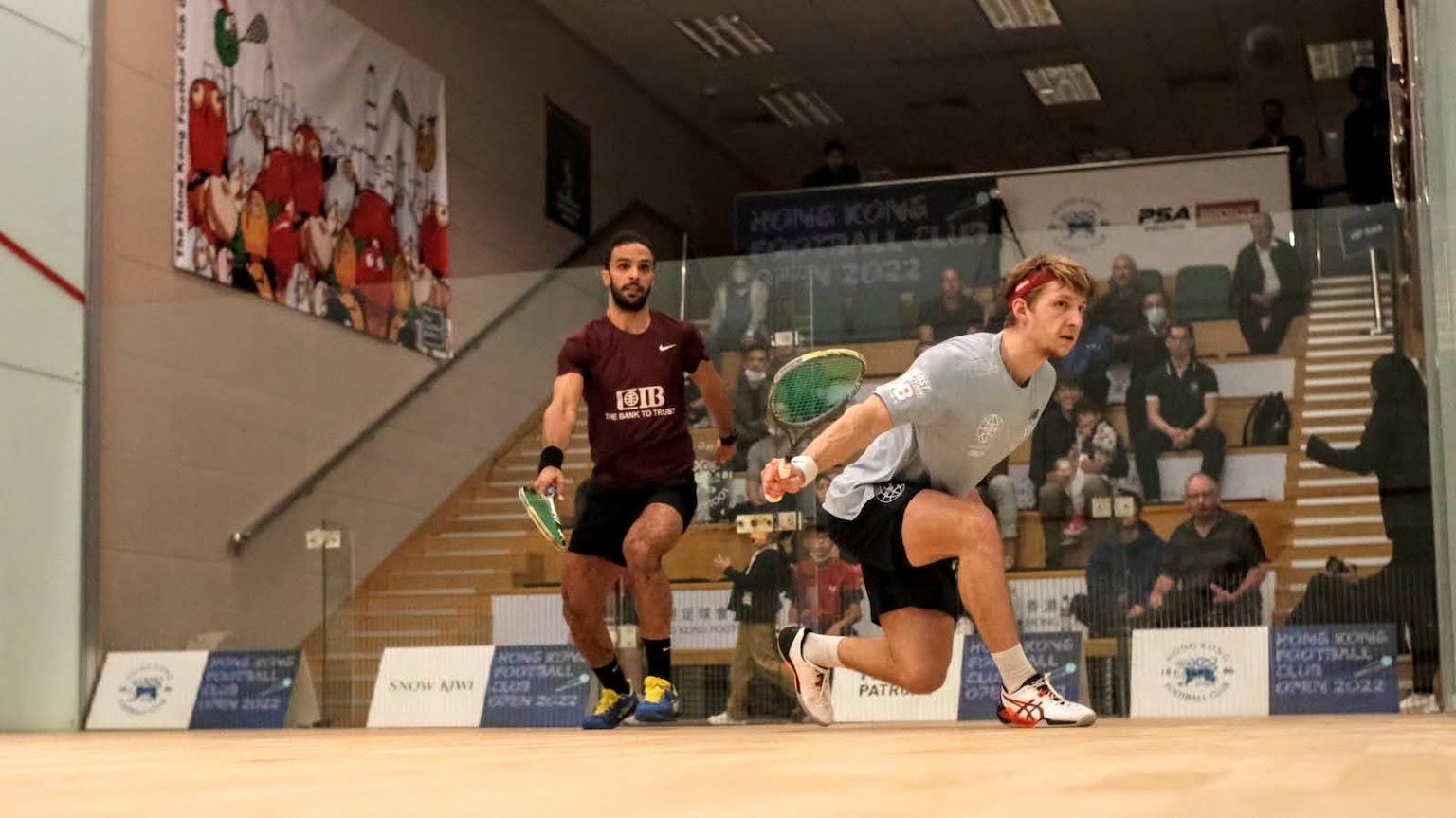 Switzerland's Dimitri Steinmann played sparking squash in the first of the quarter-finals to despatch former World #7 Mohamed Abouelghar in straight games. Outplayed in the first, the Egyptian managed to stay in touch for the second and third games, but in both it was the Swiss who found the steadier play to close out both games and the match. 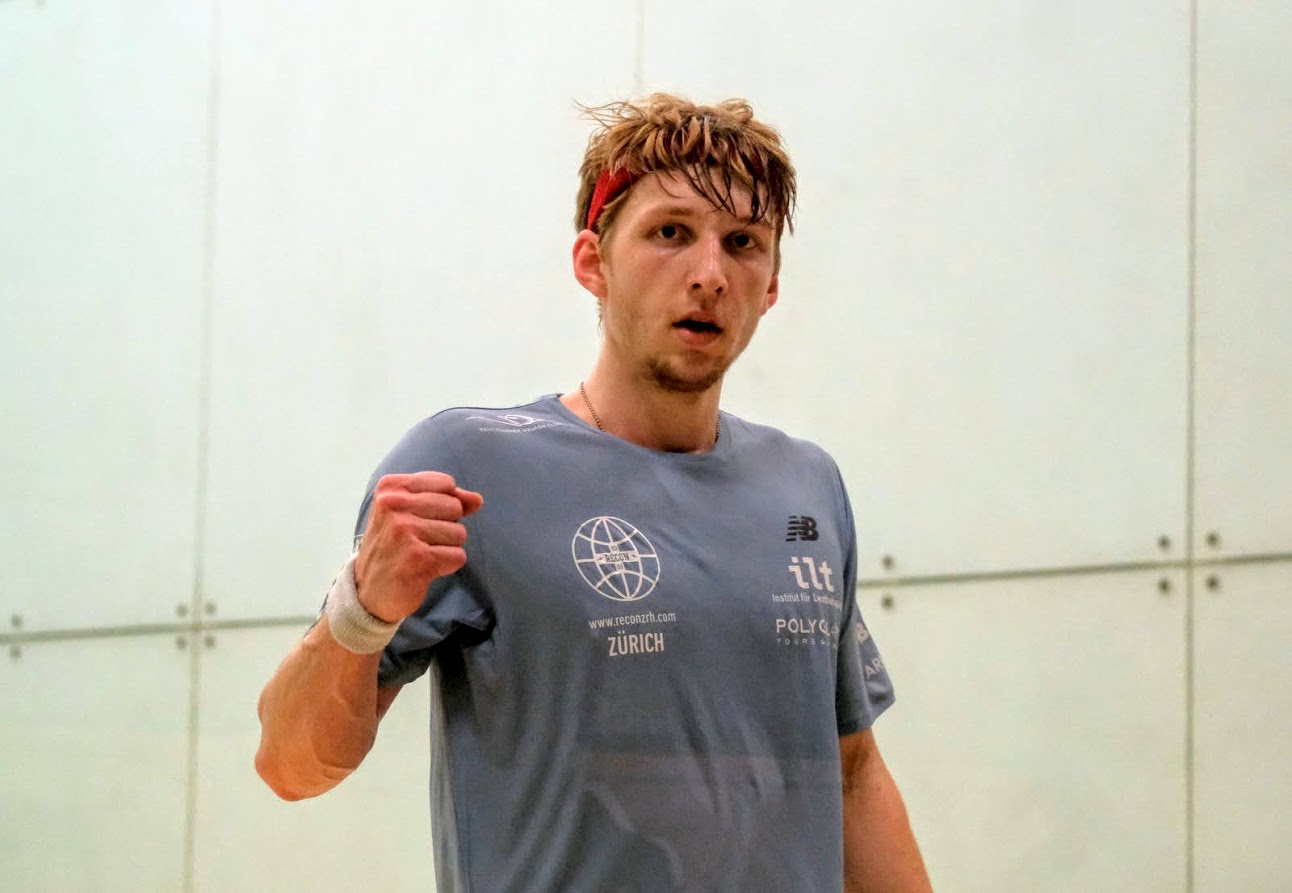 It feels amazing, my first semi-final of a Bronze event.

Six of the top eight seeds are still in contention, and there's at least one Egyptian in each of tonight's matches.

Third seed Youssef Soliman meets Malaysia's Eain Yow Ng in the closest match according to the rankings - 3rd against 5th seed, 12 v 23 in the world rankings.

An all-Egyptian battle is next, as second seed Mazen Hesham - looking to capture two Bronze titles in two weeks - meets Mohamed ElSherbini. Between them they took out the home favourite and the defending champion last night, so it will be interesting to see which way the support goes.

Last up is top seed Marwan ElShorbagy, who had the quickest win in Round Two, against Spain's Iker Pajares, who had the longest. No doubt who Tournament Director Carlos Cornes will be rooting for, but obviously he couldn't possibly say that ...